Learn More about the
​

"North Atlantic right whales are one of the world’s most endangered species. They have been listed on the Endangered Species Act since 1970 and are also protected by the Marine Mammal Protection Act of 1972. The most recent stock assessment report from NOAA Fisheries claims there are only 465 living individuals, although estimate fatalities from 2017 reduced the population to an about 450. That’s down from a peak population of 483 in 2010. Experts caution that the number is only an estimate due to the difficult nature of counting whale populations. In the past year, NOAA researchers report the loss of another 18 North Atlantic Right Whales accounting for nearly 4 percent of the species’ population.
While no longer under threat from commercial whaling, a practice that is outlawed in the United States, they are still at risk from entanglement and ship strikes. According to the Smithsonian, since 2009, 58% of North Atlantic right whale deaths have been due to entanglement in fishing gear." - National Marine Sanctuary Foundation
November 2018

All about the North Atlantic Right whale

The North Atlantic right whale is named the right whale because when they were hunted by whalers, they were the "right whale" to kill. This is because they floated when killed, due to their large amount of blubber, and they feed at the surface, making them an easy target.

In the past, North Atlantic right whales were hunted to near extinction by whalers.

The right whales were being hit and killed by ship strikes for a long time, until shipping lanes were moved out of their migratory routes.

Currently, right whales are threatened by fishing gear entanglements. Nowadays, lobster fisherman as well as snow crab fisheries are using poly steel ropes for their end lines - the long span of rope that connects the trap at the sea floor to the buoy at the water surface. This rope hangs vertically in the water column, imposing threat to right whales. Because right whales eyes are on the sides of their heads, they can not see what lies directly in front of them; let alone a thin rope. The whales will swim into the rope, and in attempt to become disentangled, they thrash and roll-entangling themselves further. The stronger the rope, the more difficult it is for the whale to break free of it. The stronger the rope is, the more severe and life threatening the entanglement is. Entanglements can be long and tortuous, inflicting deep gashes in blubber. This includes around the fluke, fins, and mouth.

​Currently, there are less than 400 individual whales alive. Only 100 or so of that 400 are females. Right Whales are a critically endangered species, and its up to us to save them. ​ 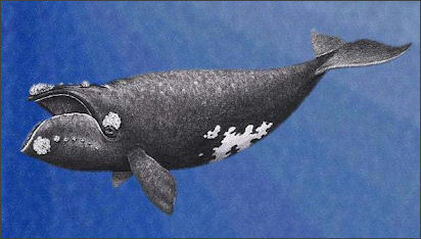 Let's face it; right whales are not the prettiest of animals. They are long and round, unlike any other whale species. Their heads are covered in white patches called callosities. Callosities are toughened patches of skin that are home to cyamidaes, which are tiny crustaceans that are like whale lice. Their callosity patterns are like our fingerprints; no whale's callosities are the same as any other whale. This is how scientists identify the individual whales. Interestingly, right whales have two blowholes, giving them a distinct V shaped blow. Right whales also do not have a dorsal fin. Right whales are filter feeders, so they have baleen plates instead of teeth.

Although Right Whales are huge creatures, they get all of their nutrients from a tiny food source; copepods. Copepods are microscopic crusteations that are packed with nutrients. Scientist estimate that Right Whales eat about 2,000 pounds of copopods each day! 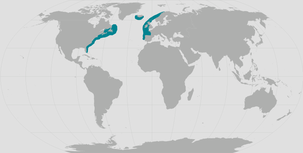 The North Atlantic Right Whales' habitat ranges from the coastal waters of Florida to the Gulf of St Lawrence, Canada. The females migrate annually from the Northern waters to Florida to calve. As the waters become warmer and warmer, their food source, copopods, move further North. This is leading the whales into new waters, and into new shipping lanes; putting them in more danger.
​

A Right Whale bill of rights

We, the last surviving Right Whales of the North Atlantic believe we have certain rights,
Among which are: